5 ways to wear the same dress 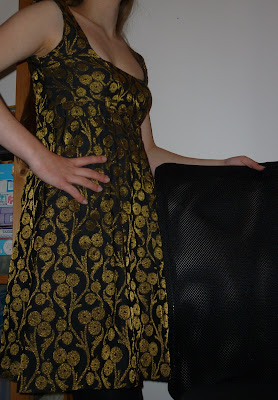 Christmas Eve! I had a lot of fun shooting this the other day with my friend Holly, so first off thanks to her for taking the pictures.

Secondly, here I have put together some basic ideas on how you can customise one dress so that it doesn't look too obvious that you're wearing the same thing to two different Christmas/NYE events or how you can take the look straight from the office to a party. You can take these ideas and add extra accessories along with different hair and make-up for each night, then lo and behold, the same dress takes on a whole new persona.

I have chosen this black and gold dress which I wore to The Birthday Party because it is fairly versatile and the colours are not too overwhelming, but if you want something a bit less distinctive, I would recommend the classic LBD or since it's the festive season, an LRD (Little Red Dress).

1. Smart - This is a good look for an official event where you will be required to dress formally. By adding a blazer, you make the outfit become serious and ready-for-business, but the addition of a pretty necklace, like my black, gold and pearl one from New Look, keeps it pretty and lets people know that you haven't forgotten how to party. Black courts are probably the best to wear with this one, but kitten heels work just as well.

2. Work wear - I suppose this is an illustration of how to go from day-to-night, but that's an important aspect of party dressing anyway, so this one is vital. The look is inspired by the idea of an intern working late into the night with the office party afterwards and no time to change. It's also cold outside, so the solution is to wear a big woolly jumper over her party dress, turning it into a skirt, and to keep a pair of killer heels in her handbag which she can replace her sensible flats with later.

3. Ladylike - It's been all over the runways, now it can be all over the season's party wear. If you slip a scoop-neck top on over your dress, you can make it a little more demure and also turn the outfit into separates. This could be another day-to-night look, or could also be a good solution to those times you don't know the dress code. If you would feel overdressed without the top you can slip it on to feel a little more casual, but if you turn up and everybody is in cocktail dresses, take the top off and put your hair up for a chic and classy style. Don't forget the square-toe kitten heels!

4. Military - I swear by military clothing. Any piece, a jacket, coat, jumper, can just lift an outfit and add serious interest. In my example, I've introduced a new colour into the ensemble, but you don't have to. I've followed a tip from Gok and added shoes in a matching colour, which he claims "makes anything you do in the middle OK." so keep that in mind. If you don't have a piece of clothing which is military, try to find an army-style brooch to just add that detail.

5. Androgynous - This is by far my favourite one. You don't have to use actual men's clothes, maybe just get something in the next size up. This waistcoat is actually far too big and I bought it by accident, but here, cinched in with a man's black belt, it looks really good. You could wear some laced up boots with this one, but try to make sure they have some sort of heel to keep it feminine.

Thank you for reading my blog in its first few months, I'm going to take a break until my birthday (which is only a few days away anyway) but until then, have a very merry Christmas, and I'll be back with you for New Year's.
Posted by Alys at 15:06

Cool options, I love the last one!!
xx