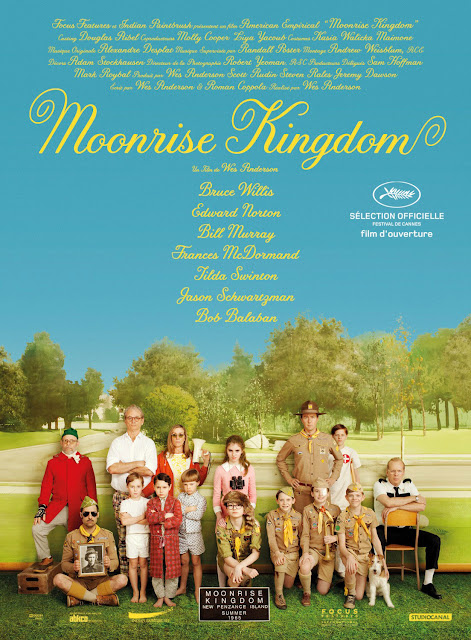 What's it about?
Two 12-year-olds, Sam and Suzy, take the decision to run away together. He leaves behind a hapless Scout leader and a troop of Khaki scouts, she leaves a pair of distant parents and three rather odd little brothers. Hilarity, whimsical-ness and faded shots of a New England island in Summer ensue.

Was it any good?
I thought I would like it due t its bizarre nature alone, but it turned out to have more of a storyline and wittier dialogue than I had suspected from the confusing trailer. No doubt this is down to the partnership of Wes Anderson and Roman Coppola, who manage to build the tension of the film gradually until a climactic storm near the end. The whole thing is expertly shot to resemble a polaroid from the 1960s and I found the use of both originally composed and well-known classical music superb.

In terms of acting, the whole thing would have fallen apart without the understated performances of the two leads, Kara Hayward and Jared Gilman. For young actors, they definitely had a certain gravitas, and I think the calmness of their performances contrasted nicely with the rising panic of the adult characters. That said, everyone involved contributed something to the atmosphere with their portrayals. I don't know if there are any ensemble awards this film is eligible for, but if there are, it should definitely win. 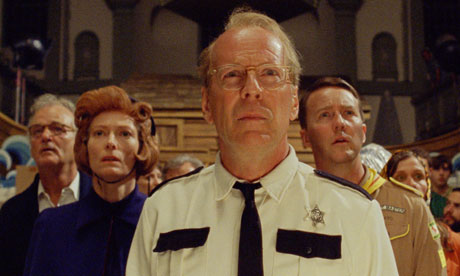 But what about the clothes?
It may seem strange to take any sort of style inspiration from a film about children in the 60s, but I have to admit I loved the mock-military aesthetic of the scouts. Plus, Suzy wears the kind of dresses which I think most girls between 13 and 16 would steer clear of for fear of looking too childish, but once you get to the age when you feel you are almost completely an adult, many return to. Or at least, that's how I account for the trend in Peter Pan collars and the majority of Alexa Chung's wardrobe. I also likes Tilda Swinton's dramatic midnight blue outfit, complete with matching hat. The costume designer for this film is Kasia Walicka-Maimone, whose work in the Adjustment bureau was just perfect, so perhaps it is no surprise that every costume detail in Moonrise Kingdom added to the overall feel of the film and enhanced the traits of the characters.

Also, kudos to Wes Anderson, who seems from the behind-the-scenes shots to be one of the best-dressed directors around. But then again, I am a sucker for a good linen suit

I really do have to see this film, I think I have fallen in love with Jared Gilman. Have to agree, I'd love one of those 60s inspired dresses to pair with white socks!

This is on my to-see list!! It hasn't released where I am yet but I am anticipating. Thanks to your review...I am even more anxious to see it now. :)