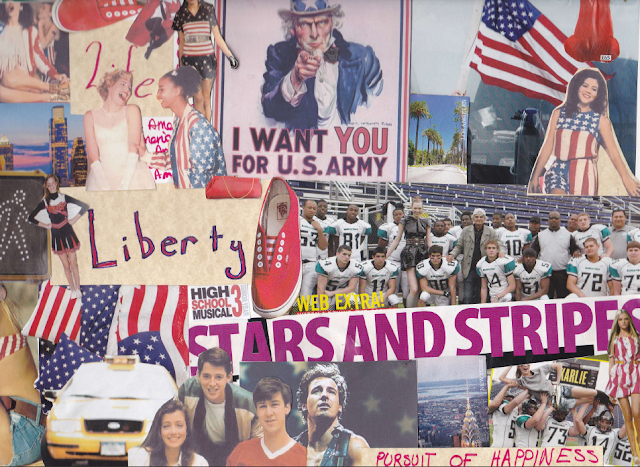 I made this collage ages ago when I'd just started blogging and I thought it would be appropriate to share it again today. When I made it I was going through a phase of being really into Americana. Seriously, I still have the star-print dress and baseball jacket to prove it. Anyway, it got me thinking: how do girls like me living in the heart of Hampshire - with a passion for reading Jane Austen and love of hosting tea parties - end up falling hopelessly in love with that strange collection of states across the water? Well, allow me to explain...


It's seductive
You only have to look at any Levi's campaign to see why we Brits might get the impression that America is land of the free, home of the sexy. Something about the imagery which spills out of the US fashion industry coincides with that image of young and carefree people wearing what they like because they can. It isn't just the advertising: film, music and books about High School love stories, they all tell us that the USA is the place to be for teenagers. Even though Britain's own youth culture is thriving, we'll never shake the image of the fuddy-duddy Lord Granthams of the country. We have such a rich heritage, which is great. But America... it's young and exciting.

It's all about the dream
I've been reading quite a lot of American fiction recently: Tom Perotta, John Burnham Schwartz and Jack Kerouac mainly. While they can be skeptical or dismissive of it, there is one idea which holds all their writings together - the American Dream. James Truslow Adams defines this as the belief that "life should be better and richer and fuller for everyone, with opportunity for each according to ability or achievement". This is a pretty good summary, but I think that the concept can have no fixed definition. It will keep changing as time moves on. We might have a lot of political and philosophical ideas in the UK, but there is nothing quite like The American Dream. Its promise of a better life seems to shine enticingly and draws us in (those of us who are young and naive enough anyway, and that's definitely me).

Geographically, population-wise, economically, politically, the USA is just overwhelmingly much larger than dear old England. The potential which that entails is like a siren-call to people who want to make a name for themselves, be that in performing, writing, studying or in fashion. There just seem to be so many opportunities out there to get your star on the sidewalk. When the furthest you can go without falling into the sea is John O'Groats to Land's End, the sheer size of America will always be a cause of wonder to us young Brits. The simultaneous desires to both fit in and be noticed are both well-served by the vastness of an enormous country.

We all want what we can't have

Let's face it, half of the reasons I've cited are traits also apparent in British culture e.g. dressing as we please? I direct you to the punk movement. But the problem is, we all grow accustomed to the places in which we grow up. It's not that we don't appreciate all the things and places which the UK has to offer, it's just that... they're attainable. For some reason, the human mind values those things which are just out of our grasp, and in this case, it's about 3472 miles out of our grasp.
Posted by Alys at 18:00

Email ThisBlogThis!Share to TwitterShare to FacebookShare to Pinterest
Labels: Collages

I love how we all steal style tips from other countries, from every era. Spotted the gang from Ferris Bueller's Day Off in the moodboard - adore that movie!