Adapted by Tom Stoppard from the novel by Leo Tolstoy, this film tells the story of an aristocratic woman of 19th Century Russia who embarks on an affair with a young count. Don't worry if you have never read the book, since I haven't either, and I promise not to spoil the ending for you in this review. Was it any good?

Let's just say that from the first few notes of the score and the first couple of minutes i knew I was going to love this film. You may or may not have heard that the vast majority of it was shot in an old theatre, which keeps the action enclosed but also opens it up to the best tricks of the trade from both stage and film. This makes for a piece which is stunning both visually and atmospherically. Joe Wright has done an excellent job directing it and the whole film felt like a dance; even when removing their hats and coats, the characters seem to move with balletic elegance. The scene changes were flowing and interesting, which meant that despite the running time of just over two hours I was hooked the whole way through. I really felt like I was in pre-revolutionary Russia, which I think was achieved by a combination of direction, props and Dario Marianelli's fantastic music.

The casting was, I felt, excellent but not overly predictable. It would be easy to throw in a combination of international stars and old guard British actors, but several of the parts were rather interesting choices. In particular, Aaron Taylor-Johnson, who I mainly know as the would-be superhero lead in Kick Ass, was a fantastic Count Vronsky. I especially liked his scene with Jude Law, who played Anna's husband, in which both actors showed a different side to their characters. Also a special mention to Alicia Vikander who made for a beautiful and likable Kitty. Apparently Saoirse Ronan was offered the part but turned it down, and in some ways I'm glad she did, because I can't imagine anyone but Alicia in the part.

Now, let's talk about Keira Knightley. Having never read the book, I don't feel like I'm a suitable authority to tell you whether she was a good Anna or not. However, I do feel that a lot of people go into her films with fairly closed minds, simply because she has been so successful. It's always a heavy charge to play a much-loved literary character, but I think if you can pull off playing Elizabeth Bennet without offending too many Austenites then you should be able to handle other hefty roles. in my personal opinion Keira did a brilliant job. She's the right age for the part (at the beginning anyway, it does span a few years though) and she works well with everyone else in the cast, especially the two playing her husband and her lover. In my eyes she was a perfect Anna, certainly for this adaptation. It would be interesting to know how someone who has read the book feels about her performance. 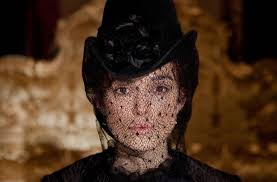 But what about the clothes?

One word: WOW. I mentioned earlier that all of the props and visuals were perfect. That definitely includes the costumes. I can see a lot of awards coming this film's way in terms of art direction and costume design. In many ways, Joe Wright has assembled the old team for this, since he has Keira Knightley in the lead role and Dario Marianelli doing the music, both of whom worked on Pride and Prejudice an Atonement with him. The same is true of the costume-designer Jacqueline Durran, who was nominated for an Oscar in both cases. Will this prove to be her third-time-lucky and earn her that Oscar win? I certainly think she deserves an award or ten.

The thing about period dramas and classic adaptations is that you can have all sorts of fun with the costumes, as long as they evoke the era. Again, the fur coats and kid gloves added to the feel of a cold Russian setting, and the opulence of the ballgowns and jewels brought the high society to life.

Some of my personal favourites included Aaron Taylor-Johnson's white military uniform, which I must say he looked extremely handsome in. There was also a lot of symbolism using colour, with Anna mainly wearing dark red or black to portray her as the fallen woman, while innocent Kitty was almost always in light blue or white. The only exception to this was a beautiful scene between Anna and Count Vronsky, in which both are wearing all white. I loved the contrast between the pure visuals and their dialogue about her being a damned woman for breaking her marriage vows.

Nothing adds to a scene of distress in a film like a huge dress to sink down onto the marble floor in is there? It's something I've noticed before in films like Marie Antoinette and The Duchess. There's just something so gratifying about seeing expensive clothes being treated like an old pair of jeans...

No images are mine and all are probably property of the filmmakers. Some images lovingly borrowed from I Capture the Period Pieces
Posted by Alys at 17:04 1 comment:

As I may have mentioned already, I went to Paris recently. While I didn't actually buy much there (I got a top and a pair of sunglasses while we were in Chamonix, but nothing in Paris) I did enjoy a little bit of window-shopping and wondering around the best places to buy everything from cheap but cute souvenir necklaces to top designer brands. These are just a few pictures from my adventure in one of the world's fashion capitals.

Coco Chanel in pendant form surveys the competition on Rue du Faubourg St Honore, one of Paris' best place for designer for shopping. I love her pose. It seems like she's unimpressed with al the other brands on the street.

The stunning ceiling (above) and a view of the make-up counters (below) in Galeries Lafayette. I do love a good department store, since they have all the variety of a shopping centre but something more of a personal air about them. That's made all the better when the shopping experience is in a gorgeous setting like this.

In Paris, the window displays can be outrageous, simplistic or just weird. The best ones I saw though had to be at Lanvin. Typically crazy and beautiful at the same time, they combined a series of child-sized mannequins wreaking havoc in what appeared to be a pre-revolutionary setting. I love how it struck just the right balance between opulence and fun.

And what better way to take a break from all that shopping than by stopping for a macaroon at Laduree? I wanted to bring back a box or two for friends but was petrified that they would be squashed on the Eurostar, so just gazed in awe through the window.

What's In My Bag? Sightseeing in Paris

I spent a few days in Paris recently (more posts about that to follow soon) for the first time since i was about 10. Needless to say, I've become far more aware of fashion since then. Paris now seems like that cool older cousin who you want to be like, or failing that, want to be liked by, but you know they're just too chic for you. Nevertheless, I did my best to keep up with the beat, and with my trusty Lanvin for H&M shopper bag, I think I managed to hold on my own.

Canvas bag - Unfortunately I don't live near enough to any of the H&M branches which stocked the Lanvin stuff when it came out, but I did manage to nab this (rather cheap) shopping bag which has proved to be extremely useful. It also helped me to feel a little more at home amongst the designer-clad shoppers on Rue St Honore.

Pains au lait- because while there is always the chance to stop at a cafe or patisserie, wandering the bridges of the Seine is demanding work. I maintain that it's always an idea to carry a snack for impromptu picnics the Jardin de Tuillerie. They're also less messy than croissant (seriously, how on earth do French women ever manage to eat croissants in a way that's even vaguely elegant?)

Notebook and pen - I've been writing a story set in 1920s Paris recently, and it was a great help to actually see some of the places which I've made a central part of the plot, especially since I've only seen them on Google street view before. I also think that there is nothing better than sitting outside a cafe with an espresso and writing stories as the world goes by.

Sunglasses - I stupidly forgot to bring any sunglasses to France, which made it necessary to buy these while we were in Chamonix. I like that they are completely mirrored (it means I can marvel at people's outfits without them thinking I'm being creepy) and also slightly larger than the normal wayfarer style. They're perfect for early morning runs to the boulangerie when your eyes still show all the symptoms of tiredness.

September issue of Paris Vogue - I'm trying to collect the September issues of Britsh, French and American Vogue (I have the first two, just waiting for WHSmith to get the US one in). I'll be doing another Septmember review this year hopefully, but I'll just say for now that I love the noir theme of this issue. I got the Kate Moss cover, but there are two others featuring Lara Stone and Daria Werbowy, all wearing the same beautiful Dolce and Gabbana dress.

More photos from Paris to follow soon!
Posted by Alys at 09:36 2 comments: